You are here: Home / Blog / Pixelpipe: A precursor to contemporary content management applications

Pixelpipe may be gone but it is not forgotten. In many ways, the social media sharing service served as a precursor to contemporary content integration applications. In this post, we look at the history of Pixelpipe, and its progression from a web-based utility to a beloved mobile application. Lastly, we recommend some apps that offer similar functionality that users can start using today to streamline their social media and blog posts.

What did Pixelpipe do?

Pixelpipe, a San Francisco-based startup, debuted in the fall of 2008. The company’s first product was a desktop version of its content and file sharing utility. The software allowed users to publish content, including text, audio, images, and video files, to multiple online platforms at the same time.

Pixelpipe subsequently released iOS and Android applications. The apps included an additional feature that integrated a phone’s camera, allowing users to publish photos without using a 3rd party application. Apps were also developed for Nokia devices and webOS phones, as well as an email/MMS app.

The company rolled out pi.pe several years after its debut. The pi.pe utility allowed users to move media files between different cloud applications. The utility’s functionality was enhanced with the addition of pi.pe prints. With pi.pe prints, users could send photos from their phone or from supported third-party platforms to printers like Walgreens for pickup.

At its height, users could post content to more than 120 different social networks, blogs, and websites. Pixelpipe had over 1.2 million users across all its platforms. The company officially closed its doors in late 2013 after it was reportedly acquired by “a much larger organization”.

The Pixelpipe desktop version was free and incredibly simple to use. The homepage featured a simplistic design. Users were given options to join or sign in at the bottom of the webpage. Joining was simple enough. Users could create a free account with minimal information.

When clicking “sign in” a user was redirected to a login page. Once the login information was submitted, the Pixelpipe dashboard was displayed. The dashboard itself had 4 options:

On the add pipes page, a user could select from some 100 platforms to incorporate into his or her feed. When selecting a platform, the user would authorize Pixelpipe to automatically access their account. This feature did not work with all 3rd party accounts. For some the user was required to enter login information for that platform. After access was granted or the login info saved, then: 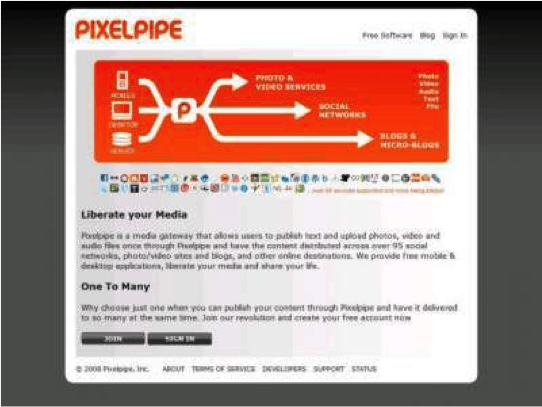 Some of the more popular choices on the add pipes page included: 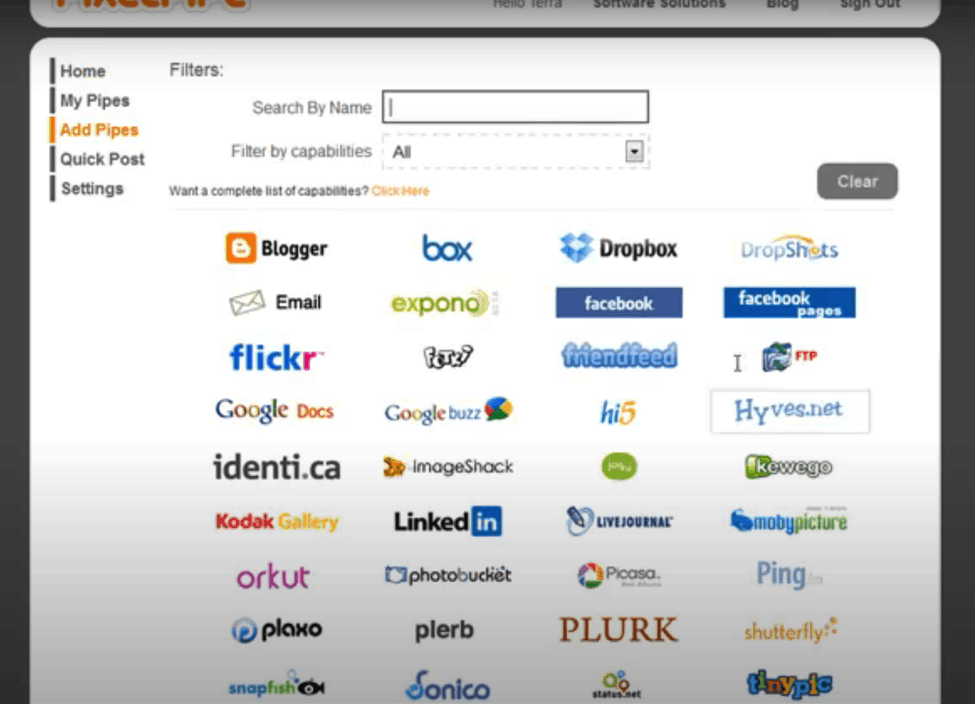 Pixelpipe gave users some flexibility. Users could either:

Adjusting the default settings was more convenient than going back into the dashboard and removing (and then re-adding) pipes before making each post.

Another great feature was the ability to pick destination folders or albums for posts. For example, a user could set up an album for sports cars. Under the settings for each pipe, the user could go in and set the destination for the sports car album. Tags could also be used to easily send content to the desired platforms and destinations. 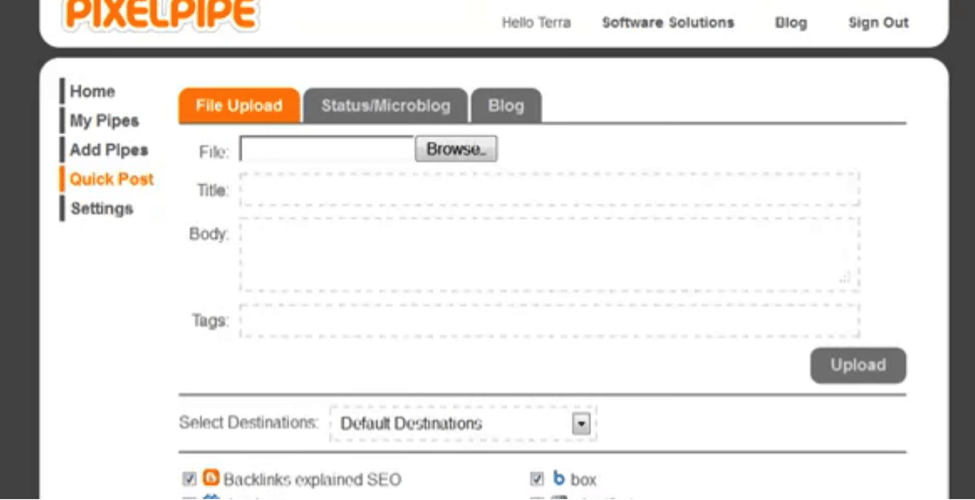 The file upload feature was a great way to quickly add photos to each account. Status/microblog was used for quick posts on platforms like Twitter. The blog feature allowed users to post full blog articles on multiple platforms like WordPress and Blogger. From this screen, each pipe that the user wished to post to could be selected by simply checking boxes at the bottom of the page. Users could also add titles, captions, and photo tags.

After each post was submitted, the homepage would display the status for each pipe. 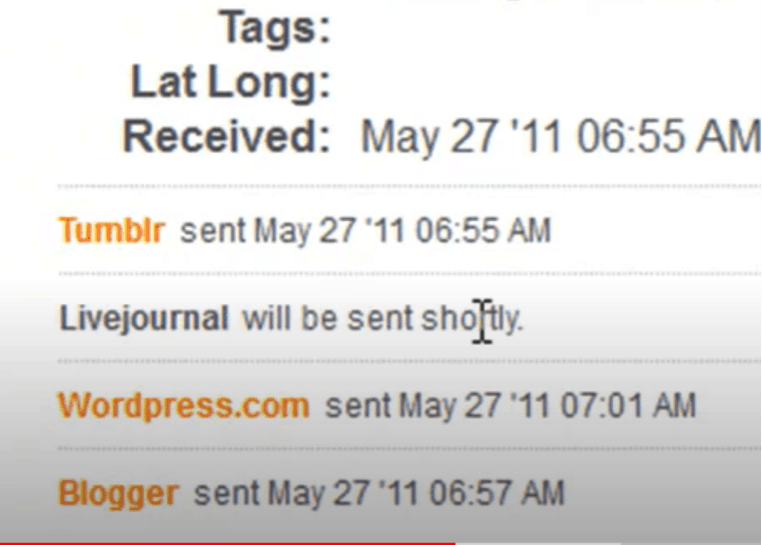 In the image above we see that a blog article was submitted to four different platforms: Tumblr, Livejournal, WordPress, and Blogger. The date and time that the article was submitted on Pixelpipe is displayed at the top. Notice that there was a slight delay for the WordPress and Blogger posts, while the Livejournal post had yet to be sent. Depending on the pipe selected there could be a slight delay, often just a few minutes.

Another important feature worth mentioning was the eventual release of plugins for more advanced image software like Adobe Photoshop Lightroom. This gave more serious and professional photographers the ability to seamlessly share their photos with their followers and customers.

The iPhone was the first mobile device to offer the Pixelpipe app. The app gave users a mobile-friendly interface to post photos from anywhere. Unique to the iPhone was the “camera” feature which let users take a photo and immediately send it to all desired pipes.

The app was simple to use and its design intuitive. The interface featured 4 tabs:

The media tab was used to browse photos and attach them to a status update. A typical user’s media screen would look something like this: 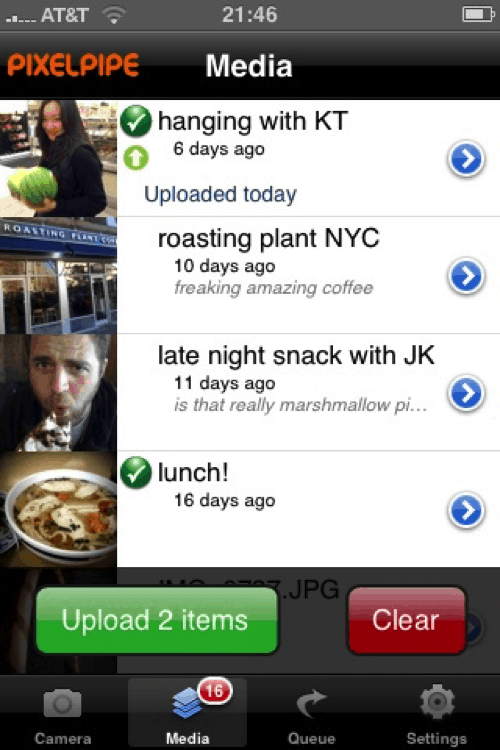 The tabs had the following functionalities:

• Post tab. Used for status updates and blog posts
• Queue tab. Showed the progress of all user uploads
• Settings tab. Used to add, edit, and delete pipes. The app settings functionality was like the desktop version. 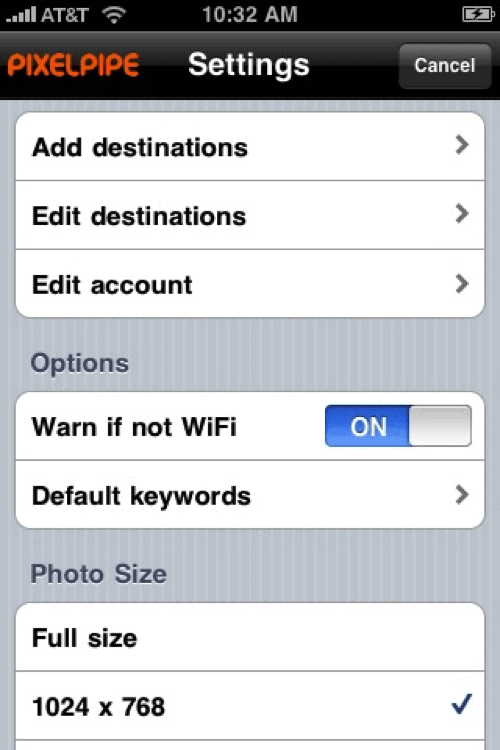 Pixelpipe for Android and Nokia

Pixelpipe was one of the first services of its kind to support Android devices. The utility was also eventually released on Nokia devices. The release of the apps followed the tremendous success of the iPhone version.

Pixelpipe’s Android app was similar the iOS version. The app included the same menu choices: media, post, queue, and settings. One feature that the Android version lacked was the iPhone’s camera feature which let users take a photo and upload it immediately. The Android version, however, made up for this through with a feature that let users upload video and audio files, in addition to photos (except for live capture photos).

One other feature that was unique to the Android version was background upload capability. On the iPhone version, when the Pixelpipe app was closed uploads would be paused. Android users, however, had functionality that is characteristic of contemporary smartphones.

Much like the iPhone and desktop utility, uploading media files to one or more pipes was simple. The user would merely:

Here is a what a typical screen looked like when uploading a photo, in this case to Evernote: 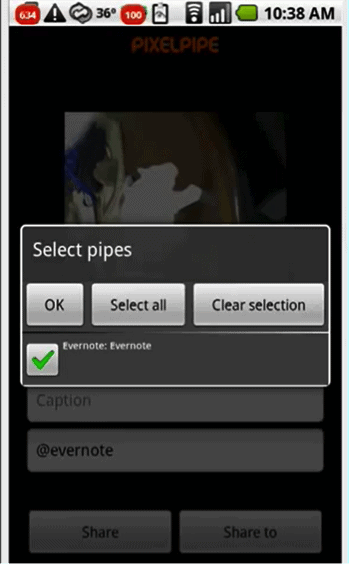 The Android version of Pixelpipe would go on to become the company’s most popular version.

Pixelpipe made two different versions of its app available to users in the OVI store. One version let users post content to their blogs. The other version was used for posting on social media and other multimedia platforms. 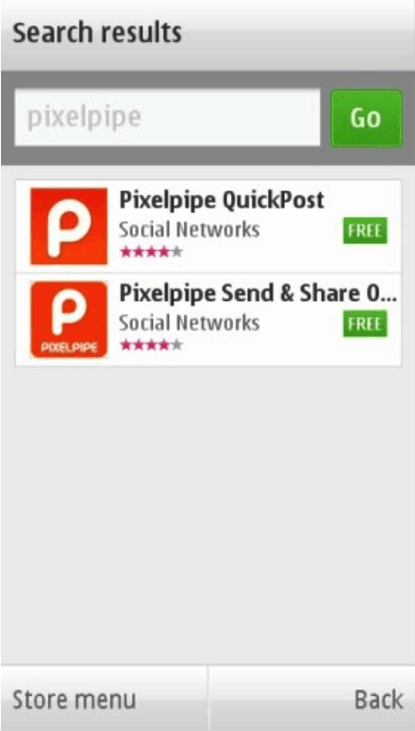 Once the app was installed, the user had the option of either creating an account or signing into an existing account. Registration for new accounts was simple, requiring some basic info like an email address and a password.

The main interface of the app was configured like the desktop version. Clicking on the settings tab would give the user options to: 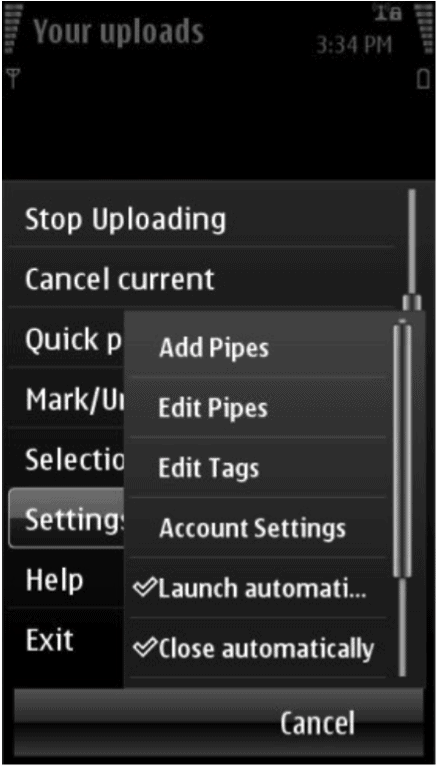 When the user clicked on add pipes he or she would be directed to the Pixelpipe server to select the 3rd party platform that the user wished to add. The menu of choices would look something like this: 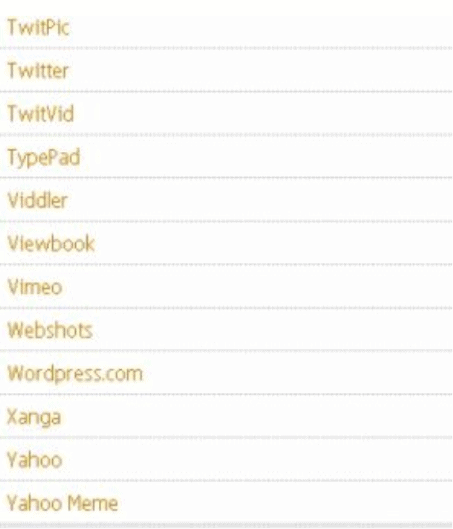 Like the desktop version, some of the accounts could be automatically added as pipes, while others required the user to enter login information. Users also had the option of adding blog pages by specifying the domain address, as well as the required login credentials.

While Nokia smartphones were primitive by today’s standards, uploading photographs from the phone’s gallery to pipes was simple. The user would simply:

The photo would be posted on each pipe according to the user’s default settings for each pipe. 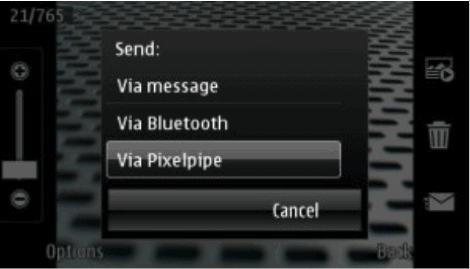 Feel like you missed out on Pixelpipe? Fortunately, there are three apps that you can download today that offer similar multimedia functionality:

SyVID is a great app for users that want to publish video files to multiple platforms at once. The app is cloud based and works on your:

SyVID is more comprehensive than other video sharing tools. The app allows users to syndicate videos to 8 video sharing platforms, as well as share videos on 14 social media channels at a time. In addition to convenience, the app gives users’ websites a boost in organic traffic through increased views and social media shares.

Best of all, you can try SyVID risk-free since they offer a 14-day money back guarantee.

Magic Submitter is one of the most comprehensive content distribution systems of its kind. The software distributes articles, blogs, videos, and press releases to some 2,000 websites. What makes Magic Submitter unique is that the software is far more than a convenient way to distribute content. Other benefits include:

Onlywire offers similar social media management features to the Pixelpipe app. Users can post to more than 20 social media networks at a time. The app is great for both individuals and agencies. Onlywire supports multiple users, offers timed campaign features, and allows users to generate detailed reports for clients.

Benefits for all users include:

Onlywire is more affordable than other social media management apps. Pricing starts at just $9.99 per month. They also offer users a free trial that can be cancelled at any time.

Pixelpipe was a revolutionary app that changed the ways that users distribute and manage content. While the app is no longer available, there are several utilities that offer similar functionality and convenience.